Daily Collegian: ‘If the World Championships were today, I’d be ready’: Why Zain Retherford is feeling confident as ever 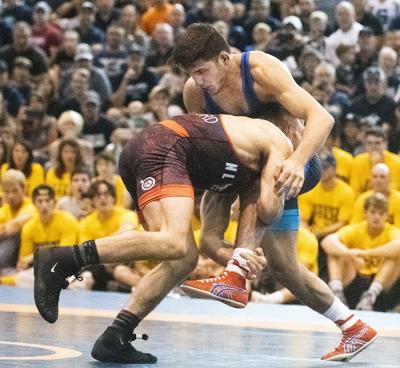 Zain Retherford was like a lot of kids in that from an early age he knew what he wanted to do when he got older.

But that's where the comparisons between Retherford and most normal kids stop.

A lot of people might say they want to be a firefighter or a dancer or an astronaut or a racecar driver, but very few likely aspire from the age of just six years old to win a gold medal in a niche sport like wrestling.

And yet, all because of one man and one box of cereal, Retherford knew that's exactly what he wanted.

"I was six years old and I saw [Penn State] coach Cael [Sanderson] on a Wheaties box. That's the coolest thing. He was winning the Olympics and I knew that's what I wanted to do," Retherford said in June after originally clinching his spot on the United States World Team.

Those inside Retherford's inner circle knew he had the requisite work ethic to be great, and to some it was just a matter if the athletic ability would catch up.

"I knew Zain had a serious, focused work ethic from about fourth grade on," Ken Chertow, a former Penn State wrestler and Olympian who coached Retherford, told the Daily Collegian in June. "I saw that he had the potential to be good in the sense of he's very focused. He's really intense in his drilling. I never looked at him and said he's a gifted athlete."

But Chertow isn't out to diminish what Retherford has done or his prowess and domination in the sport where he's quickly becoming a rising star.

"He was getting better technically, he was so serious — I loved it," Chertow said. "But I still didn't think 'Oh, this kid is destined for three NCAA titles."

Now, nearly two years removed from his time at Penn State and with three NCAA championship trophies to his name, Retherford finally set out on that path to win an Olympic gold medal.

It would first mean needing to make his second ever United States World Team and compete at the World Championships.

Retherford ultimately first made the United States World Team on June 8 after beating Cornell's Yianni Diakomihalis at Final X: Rutgers, but after Diakomihalis's camp protested the deciding match because of a late challenge call, Retherford's spot was then immediately in question.

First is the important word there because an arbitrator got involved and ruled in favor of Diakomihalis, meaning the second and potentially deciding match would need to be re-wrestled.

And so, Retherford, who entered the wrestle-off with a 1-0 lead, went out and handled Diakomihalis 2-1 to retain his spot as the 65 kg representative on the United States World Team.

The usually stoic and mild-mannered Retherford admitted he was "angry" when he first heard about everything that would be going on.

Beyond that however, Retherford also resented the fact that his coaches were dragged into this and their lives were altered.

"I was angry, I think, you know, when I heard everything," Retheford said after officially clinching his spot on the World Team. "A lot of this interfered with, you know, my life, the past, and my coaches lives. You know, my coaches have been there for me, they sat through the whole process and have been very supportive. But just a lot of life things made me angry."

While Retherford might've been angry about what transpired, the need to prove himself once again also showcased his trademark work ethic and mindset en route to the win.

"He did a phenomenal job with his mindset, with the things he can control. He took everything in stride. He could've been really negative about it but he doesn't say much," Russ Hughes, Retherford's former high school coach and a former Penn State All-American told the Daily Collegian. "He just goes about his business and does what he's supposed to do."

The combination of events ultimately meant the three-time NCAA champion would have to climb one more hill to reach greatness yet again.

It's something those who've coached Retherford in the past, like Chertow, say he has no problem doing.

"He's done a great job rising to the occasion when it matters most and he does a wonderful job peaking," Chertow said.

Part of that is Retherford's penchant for focusing on and prioritizing the mental aspect of his game — something he feels gave him an edge back in June.

"You can always control your mentality so even when you're feeling not 100 percent, you can convince yourself to go out and do your job, so the mental aspect is more important," Retherford said after Final X.

It's clear Retherford had a presence about him and a way in which he conducted himself that resonated with people, even early on in his career.

In one of Retherford's early freestyle appearances, he left such an impact on an Iranian wrestler who had never seen Retherford compete, let alone heard of him that the wrestler predicted Retherford would ultimately reach his goal.

"There was a guy who came up to me from Iran and he says, 'Do you mind if I talk to your athlete?'" Hughes recalled. "He ended up grabbing Zain by the face, kissed him on the cheek and said, 'Next Olympic champion.’ I thought 'Wow, that doesn't happen every day' that someone from a foreign country would recognize the way he carried himself."

However much confidence that exchange might have given Retherford at the time, beating Diakomihalis was equally as important to boosting the former Penn State great's self-esteem and affirm his deservedness of the World Team spot.

"You know, if the World Championships were today, I think I'd be ready. Yianni's a great competitor and he's been knocking off the best guys week after week so I think if I can beat a guy like that, I'm ready to go."